Why EOW is now a settlement branch? The Real Story, OFF THE RECORD style!! 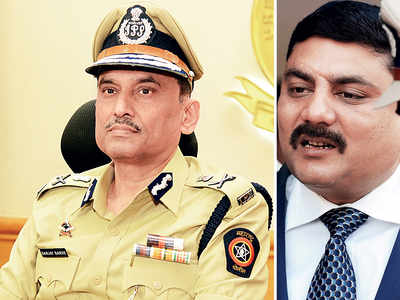 Why EOW is now a settlement branch? The Real Story, OFF THE RECORD style!!

First & foremost, Congratulations to the Commissioner of Police Mumbai IPS Sanjay Barve for getting an extension for 3 months after a gruelling battle with his contemporaries who fought tooth & nail till the last minute yesterday. Since last two weeks through my blog, I tried to expose the “Gangs of Wassepur” “Harry Kilo Net” gang who tried every trick in the book to oust the CP, but at the end, CM Devendra Fadnavis & Amit Shah stood behind Barve like a rock, and gave an extension “relaxing” all the rules in the book. Bravo, Barve!!

See, I’m not a ‘supari’ journalist. Neither I’m expecting Mr. Barve to give me truck loads of money nor do I hold anything against these “Bihari” IPS officers & their friends in the industry. But why my blogs get widely spread is because I always stand behind clean & honest officers, in this case Sanjay Barve. Clean, marginally clean, partially clean is allowed in my text book 😀😉…I have many friends in the IPS lobby of Maharashtra who are Bihari’s or Hindi speaking one’s–but even they called me and extended their support towards Barve. They are in fact the scared lots of new & old one’s  combined, who don’t want to be part of these Gang members just because they belong to the same home state or speak the same language. Now to the story…

Why EOW was called a settlement gang by the CP? The paper wrote a very vague story giving nothing as am sure the editor must be on the poor reporters head for not disclosing the “high profile case”. Anyway, this case is about IP rights & it belonged to the Cyber department. Today it is registered there. Nowhere, means absolutely nowhere, the EOW could have got involved, but someone had something else in mind. If you are a regular TV watcher, a mega superstar promotes an E learning platform with a kid in his toe. Now this company through it’s hard-work, patience & weathering all the storms, is a very big company today. It is estimated to be for few hundreds of crores in the market. A technocrat who knew the ‘core’ of the business suddenly decided to quit after his stint with the company for 5 years. he knew everything about the company. From the core to the business… He  then joined hands with a young 25 year old– who is the son to one of the biggest hospital chains of our country. Young, brash 25 year old and the technocrat joined hands & formed another E learning company & introduced the same e learning company product and named it “A”, a clear copy of his parent company’s product. Things went smoothly for some time. But as it happens in movies, again this Technocrat and 25 year old had a major fight. They decided to split the company. 25 year old’s father a big man himself and owner to one of the biggest hospital chain had few “Gangs of Wassepur” IPS friends. The technocrat & the 25 year old split!

In the meanwhile, the technocrat went ahead & this time, all by himself introduced same product with same everything & called it  “B”. The father & the gang members in the EOW registered cases against left, right & centre against  this technocrat for theft of technology and blah blah…

This ‘crooked’ officer in the EOW decided on his own to show the company of the 25 year old & technocrat a RS. 90 crore venture with a loss of Rs. 9 crore annually. The rigged the records & books, obviously. Since they all wanted to nail this Technocrat, EOW was the obvious choice. And since, no case within Rs. 6 crore per-view falls under EOW, the books and figures were rigged so much so that the loss was pegged to be Rs. 9 crore, turnover Rs. 90 crore. But what the EOW forgot is that every company which is “pegged” to be of a certain number, needs to be approved by hell lot of agencies & banks. For e.g. if any company’s worth is suppose 1000 crores, how is their market value derived? There are special agencies who do the due diligence of the company and then their market value is determined. In many cases where huge numbers involved a mercantile bank will also do the due diligence.  So, some or the other agency needs to authenticate it, right? This officer at the EOW forgot to do that and on his own decided the worth of this company to be Rs. 90 crores. Game was over then!

This technocrat who was in doldrums after being held to ransom at the EOW approached the great IAS bureaucrat who exited the CMO to head a Corporation in Mumbai. This IAS immediately rung up the CP and Barve with his own style of investigation and finding facts took care of this technocrat and now the case is transferred to Cyber crime and out of EOW…Kya badmaashi thi nah?

If these IPS gangs want, they can nail you & your family by doing anything. Best part is when the product A & B were launched in the market by the technocrat both the times, till now the original E learning brand who is endorsed by the mega superstar still does not know how come their technology and product is out in the market as a substitute…The day they find out,  EOW is surely under a lot of trouble.