The first day began with landing at the airport and clearing immigration. Since it was a late night flight and arrival scheduled for early morning the toilets were ‘clogged’ by Indians. The Thai staff at the airport which was appointed for the maintainence of the toilet couldn’t believe her eyes when she saw people in their vests and underwear’s (I so wanted to click) in toilets some taking insulin shots, someone brushing and someone putting gutkhas in their mouth to clear the stomachs. We are Indians after all. My bowels were to be controlled as hardly could find a space to even stand. But luckily there was no one queuing outside the toilet which marked “Handicapped”, and I rushed in before anyone could actually sit inside and do their job. My job was done….

As the luggage arrived we met the affable “Penny” an old associate of Dilip who works closely with the biggest in business such as Cox & kings, Kesari & so on…Dilip treats her as his own sister and the affection and warmth could be seen. Penny is Dilip’s associate for Thailand for more than 7 years now. You just walk into Thailand, and if you Penny you are sorted.  Then walks in a handsome man in his mid 40’s (I first told him he would pass off anything in his late 30s) to accompany me Dilip & Jay. This man had boarded Kolkata-Bangkok flight and had landed 40 minutes ahead of us. Dressed in blue shirt and denims this man’s physical appearance gave us (in our mid-thirties) run for our money. Jay introduced him as Mahesh (Bhaiyya) Toshniwal and Dilip murmured in my ears, “He is the guru”….We packed our bags in a mini-truck hired by Penny and our journey for 4 hours to Hua-Hin began. When I told him I write about state politics, I was surprised to know that a Man from Kolkata knew so much about Maharashtra Politics…Well informed, I quipped.

Since the group of 60 was to arrive the next day, it was we 4 who had the company for each other in the plush resort of Hua-Hin. But as luck prevailed, whilst coming down a staircase in a Mall, I missed a step and had a nasty fall. The little finger on my left leg was swollen pretty bad and pain was excruciating. Seeing me in this conditon, the Guru gave his first lesson to me called “Correction Theory”. Everything is related to mind. Maheshji asked me to practice some exercise the night I fell before I slept 15 times, and friends believe me I was 50% normal the next morning…Magic Isn’t it? Now What is Correction Theory and how does it work? If I tell you, I might miss on to some important points, hence will leave it to the master.

Next day the group arrived & I was 50% alright. The first few hours after the breakfast the rooms were allocated. The second day after Lunch the session began. Basis of entire teachings of Mahesh Toshniwal is based on certain Laws. They are Laws of Attraction and Laws of Circulation. According to him, if you master this, you are the champion of your life.

The days began with sharp 6am Meditation Class along with a new concept called Solar Plexus. It is a breathing format. Mediation by the sea in non-polluted air and silence with just the waves sound just made our mornings perfect. Then breakfast, tea break, lunch, high tea and dinner was all pure Vegetarian affair (not only VEG but even the Jains had a buffet). Hats off to Dilip to arrange this kind of menu for all 6 days. In between, the sessions where Maheshji spoke was an internal part. Also there were tasks given to all 60 people which needed to be done at any cost even it meant for some of to loose their sleep. In short it was a rejoice! Believe me when I say this…be it a 10 year old boy or 65 year old man none of us slept for more than 4 hours everyday…No partying, No drinking only listening to the great Mahesh Toshniwal and learning new techniques to LIVE.

Best thing of all 6 days was the Red carpet event which was conducted every night after the dinner. Every member was divided into a team and was asked to give a thought of their ultimate aim in life. The entire team has to enact a sequence in front of everyone as if they have achieved that aim of theirs. You have to be formally dressed (people carried suits and gowns in Bangkok, Jay still fitted in the same blazer he had worn on his reception night 8 years ago) and you have to express GRATITUDE towards your achievement. Then only success stays, believes Toshniwal. It was such  an enthralling experience that everyone would give their best shot. Everyone had to fill in with their roles and enact as if they have achieved whatever they had dreamt. Then we had a wedding sequence of a girl from Delhi event enacted where she actually dressed up like a bride.

Oh by the way, I was lucky to be presented the book written by the master himself called “WOW”. By the way Mahesh Toshniwal’s life was not always about training and preaching gratitude. He had a successful career in Cement Industry. But it was when he lost his dear mother in 2007, Mahesh ji who had severed all ties with all his best friends in Kolkata for 2 years, realised Gratitude is what everyone needs in life. From that moment onwards it was never looking back spiritually for Mahesh ji. Today he travels length & breath of our country to conduct one day, 3 days corporate events wherein the biggest in the all the industry attend his lectures.

I thank Mahesh ji & Jay for allowing me to come to his class & take something back. By the way though Jay is Mahesh Toshniwal relative and played an integral part of the success of this rejoice trip, my sincere thanks to Dilip for making it a grand event. But when I was back in Mumbai and all the naughty questions were popped as to what all happened in HUAHIN–I replied HUAHIN me Kuch Hua Hi Nahi! 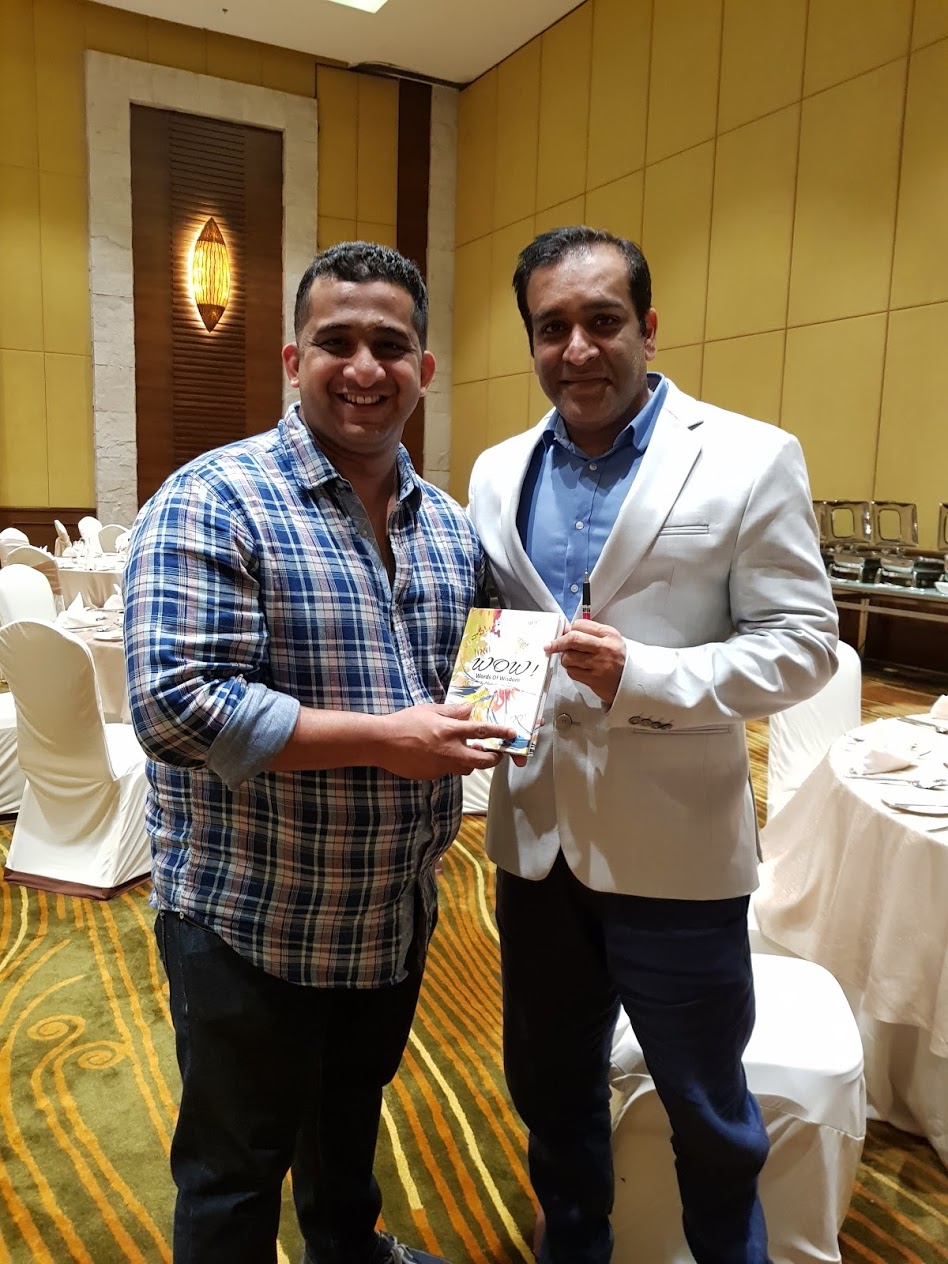