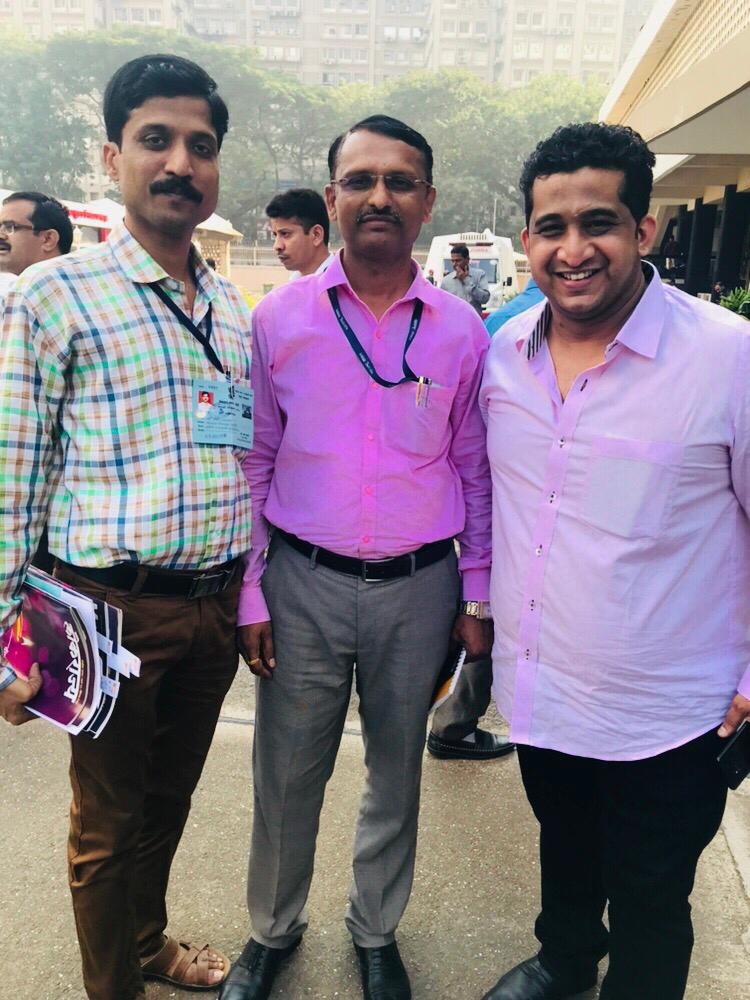 Meet Mr. Maruti Fad, the gentleman in the centre, working with Minister Dilip Kamble nowadays. What a day today, 26/11, to get introduced to him by our very own Irshad Bagwan, to the left, who is Asst Director DGIPR –Met them at Vidhan Bhavan today. Well the story goes like this…On the fateful day of 26/11 Mr. Fad was driver to then Secretary to the CM– Bhushan Gagrani.. Gagrani ji called Fad at around 2;30 in the night to be picked up from Mantralaya for his residence. When the phone rang in the Fad household, the wife was very adamant that Maruti ji should not go for the job tonight as terrorist had already punctured Mumbai and news had already spread like fire everywhere.

But committed to his duty, Fad removed his car with a red beacon flashing and began driving. He reached the lane of St. Xavier’s College and guess whom does he see right in front of him? None other than Ajmal Kasab. Kasab fires at the car, thinking that the car with beacon must be some VVIP. But apart from Maruti ji, there was no one in the car. At that very moment, Maruti decides to run over Kasab but Kasab had already climbed the footpath and was continuously showering the car with bullets. Unforutantly two bullets brushed passed his fingers (one finger had to be amputed) and one bullet hit Maruti’s hips. Maruti knew his end was near, but using his presence of mind, Maruti had locked his car’s all 4 doors and acted dead. Kasab came near the car to check his victim, but on seeing the driver dead he tried to unlock the car but failed as the car’s doors were already locked. Furious and frustrated from a distance Kasab and his partner threw a hand grenade below the car, but it was the day fate had decided to keep Maruti alive; the grenade skidded below the car on the other side of the footpath and burst. In the meantime Kasab’s attention  was “diverted” with the car approaching from the front side for which he had to take cover. The car approaching had Late Hemant Karkare and team whom Kasab and his partner killed mercilessly. Maruti saved himself, but even today regrets his inability to save the brave police officers.

By the way, even today, Maruti fad has not accepted a single rupee from the government in form of compensation. Salute to this great man, and thanks Irshad bhai for getting me introduced to Maruti Fad…